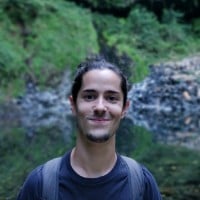 FullMetalUpdate is the first open-source and fully integrated solution for updating your IoT devices flexibly and robustly Over the Air (OTA). Yet even with control and availability, an OTA update might still fail and a device may end up bricked, not only without the update but entirely out of action, too.

With this in mind, Witekio’s Director of Technology Cédric Vincent asked me to add a rollback functionality to FullMetalUpdate. This new functionality needed to ensure that even if an OTA update failed there would be no device downtime and that the device would be unbrickable.

Sounds straightforward, but there’s a catch.

Recall that FullMetalUpdate makes a distinction between updating the target OS and the applications that runs on it. As a consequence, rolling back each entity is a problem of its own. The common solution? OSTree. If you have not heard of this before, review this great article by Stephane Dorre called “Hands on OSTree for your differential system updates”. In adding rollback to FullMetalUpdate, we took advantage of the Git-like philosophy of OSTree: having several commits also means that we can dive deeper on a given one.

Rolling Back the Operating System

An OTAS update of an OS may fail for any number of reasons. We first had to define  the behavior of our FullMetalUpdate rollback feature, and we decided to select the following:

For clarity, we consider an OTA update to be successful when it has reached the FullMetalUpdate client.

Note that OSTree cannot work on its own to update the OS. In our case, there are two other entities that also ensure the proper deployment of updates. The first one is U-boot, the bootloader, and the second one is our FullMetalUpdate client.

U-boot is a bootloader recognized in the field of embedded systems for its wide selection of supported cards, and because it allows the developer to customize the way the card is booted. U-boot defines an environment that it uses to start the card. This environment, loaded from dead memory in RAM, is composed of variables, containing either a value or a command. U-boot is capable of executing a number of basic commands (such as loading the core from the SD card into RAM) but also performing logical operations (such as „if,“ „else if,“ „not,“ etc. like a basic shell).

OSTree, at its core, makes use of the kernel command line to know on which deployment it has to boot. At boot time, U-boot will load OSTree’s environment variable in /boot/loader/uEnv.txt. This file contains crucial information needed by OSTree for the new deployment:

kernel_image, fdt_file, and ramdisk_image are the kernel images, ramdisk image and device tree, respectively, that U-boot will load in memory for initialization. bootargs are the command line arguments that U-boot includes in the kernel command line.

When an update occurs, OSTree will change /boot/loader/uEnv.txt to:

At boot time, a custom script is executed by U-boot. This is done by loading this script from the MMC, and then the execution is passed to it. The script works as follows:

if init_var is not set:

success = 0  # this deployment is not yet successful

During an OTA update, the FullMetalUpdate client deletes init_var from U-boot’s environment, which resets the variables success and trials. Then, on each boot, trials are incremented. If the boot fails five times, all the rollback variables (kernel_image2, bootargs2 and so on) replace the original ones, which ensures a proper boot.

Finally, when the OS boots and the client is initialized, it will check whether the system has rolled back or not by comparing the commits of the booted deployment and the distant deployment. Depending on the status of the system, the client will send feedback to the server, indicating that the update was successful or not.

Avoiding a system hang during the OTA update

This rollback feature rests on the hypothesis that the system is able to reboot upon a failure. There are multiple points where this can happen during an OTA update, and we offer a solution for each of them:

Rolling Back an Application

In FullMetalUpdate, all containers are started with systemd through the use of services. This allows for a proper life cycle, CGroups, and the usage of the great API systemd is offering to manage services. Thus, runc containers are started with a service file which can be configured to start or stop the container and execute commands after these jobs. This last point is important as it is the core of the FMU’s rollback feature for containers.

Systemd offers a type of service called notify. This service differs from simple services because it is waiting for a flag coming from the main process (or any child process depending on the configuration) before being switched to an activated mode. The service will start the main process and then wait for this notify signal. If the service either exits without sending the signal (successfully or unsuccessfully) or does not send the signal during a predefined delay, the service is considered to have failed. If the container successfully executes systemd-notify –ready, the service considers the container startup as successful.

It is useful to leverage this feature to determine if the container should rollback to its previous version. As a consequence, the rollback feature for containers is optional. This choice of being an optional feature rather than a default, static feature mainly comes from the fact that containers may vary greatly depending on the types of features they implement.

Using notify services to control the status of applications

First of all, let’s describe how a successful OTA update happens with notify services: 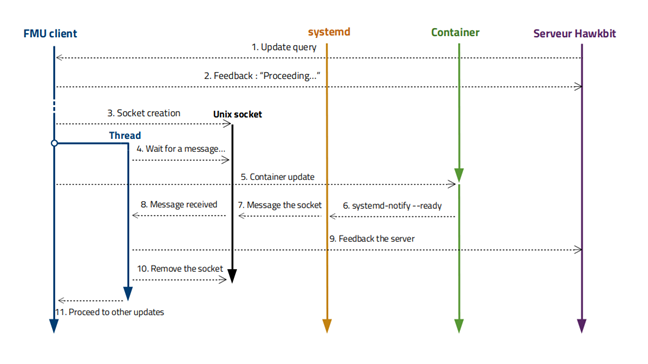 Now, let’s see a scenario where the container startup fails to send a feedback message before a systemd-defined timeout value. After this timeout, systemd consider the execution of the container as failed. Steps 1 to 5 are exactly the same: 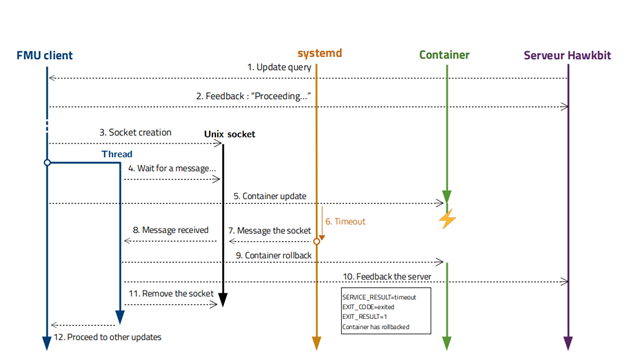 Here’s what happens next:

With this design, it is easy to see that we are able to trigger a rollback on an application for which the startup has failed. Of course, there are multiple scenarios that might be the cause of the failure, but all have been tested and are handled by systemd.

FullMetalUpdate Rollback functionality now allows for 100% uptime for of your device, and also gives the user feedback on the state of the device. It allows the user to take risks without worrying about bricking the device, which is a great feature when working with devices remotely.

This solution is already entirely integrated when building from the build system. Need to enable these features for a specific board? Reach to us on gitter!