A story of an agile coach, sprint cycle and a snake

Homepage A story of an agile coach, sprint cycle and a snake

It’s always interesting to join a new company as you arrive with an outsider’s view on projects that may have been in progress for some time. I experienced this when I arrived at Witekio – an agile company but one where staff are still learning about agile – to take up a post as a Senior Project Manager.

Before I go any further, allow me to explain how I could be a Senior Project Manager in an agile company; after all, isn’t it a little oxymoronic? In truth, a project manager is but a title of convenience. Depending on the project I might play the role of a traditional Project Manager, an Account Manager, a Scrum Master, or a proxy-Product Owner.

Additionally, though, I have a secondary role as an agile coach for our office and so, about two years ago and soon after I arrived at Witekio, I found myself sitting in on a retrospective for a scrum team that repeatedly had failed to meet their sprint goals.

How to meet your sprint goals … with a waste snake

The team was a little apprehensive and didn’t quite believe how I – as an outsider – might be able to explain why this was the case. Although I suspect the team kind of knew the reason, in that retrospective they seemed to have difficulty remembering and explaining why.

And so, in one of the daily stand ups in the next sprint, I printed out both the head and the tail of the Waste Snake and pinned them to the wall. Turning to the engineers, I suggested that if they received any unexpected and unplanned work requests in the next sprint, they should put a post-it with the request in the body of the snake.

And I must tell you, there were more than a couple of ‘she’s gone nuts, guys’ looks on the faces in front of me.

The scrum master, though, went with it and explained that, even if I was new, the team needed to support me. With the help of some made encouraging if still puzzled noises and a couple of prompts, we quickly ended up with three or four post-its on the Waste Snake. By the time the next retrospective rolled around the team had started to cotton on and realized that perhaps this might be a good idea. Indeed, by the end of the retrospective, the waste snake had been fully adopted by the team and had been nicknamed Oscar. Through the next sprint, Oscar grew and grew so that by the end of the two-week sprint he was quite a healthy length, to the point that he had to zigzag across the wall to capture all the unplanned requests. 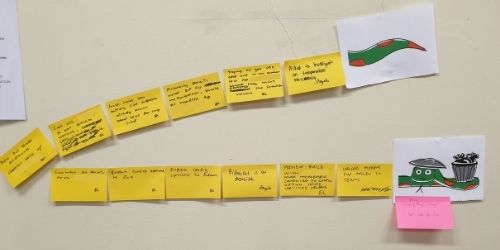 As it happened, the team had planned a meeting with the customer at the end of that sprint. The customer was the Product Owner and deeply involved in most of the ceremonies of the sprint. In the meeting I introduced the customer to Oscar the Waste Snake and reviewed the long list of requests. The customer rapidly agreed that some tickets would have been better if they have been left unplanned and folded into the following sprint, especially as the dangers and the cost of context switching were explained. This, in turn, led to a useful discussion on planning and predictability horizons, and the sprint cycle was thus shortened from 2 weeks to 1 week.

Of course, some tickets were judged as inevitable, and it was accepted that there would be some interruptions as this was expected for the point in the life cycle of this project. Thus, it was agreed that to avoid derailing the entire sprint a percentage of sprint time would be reserved for certain high priority unplanned tasks and, in these cases, a formal “Oscar” ticket would be added to the JIRA board. With the lesson learned and applied Oscar was retired from the wall and offered a more comfortable place to curl up on the radiator beneath the office whiteboard.

I would drop in on the same team a bit later during one of their planning sessions where I heard the same customer explain that, as he was proposing only a small task, it could be planned on Oscar. I stepped in as a coach and explained that the idea of a waste snake like Oscar was that it was the place to capture unplanned and unexpected work to stop it derailing the sprint, and to act as a conversational prompt in retrospectives.

How an Agile coach has inspired new self-organising team

Oscar took on a life of his own. Another team in the office kidnapped Oscar and started using him to highlight the number of tickets they were discarding because the customer kept changing their mind. Sharing Oscar’s adventures with Witekio’s internal Agile Network led to one of Witekio’s French team adopting an Oscar of their own: Monsieur Oscar, perhaps?

The moral of Oscar’s story

When you introduce the concept to a self-organising team it can go anywhere – and sometimes the results will surprise you as they take you in directions you never imagined.

Sometimes it might require a little retraining to maintain true agility, it is true that being an agile coach is a lot like being a gardener: you need to know when to train, when to prune, and when to fertilize.

Today, Oscar lies safely curled up in a snug spot in my office desk draw, ready and waiting to be called into action when the global pandemic allows in-person teams to gather gain. Yet even in these days of COVID-19 and remote work the principle of sticking the head and tail of a snake on a virtual whiteboard and adding virtual post-it notes still has enormous value in making the usually invisible impacts visible once again.